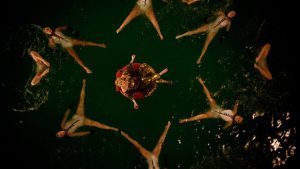 The video for ‘I Drink Wine’ was previewed during a small live event ‘Happy Hour with Adele’ the night before the big release, where the singer was interviewed and answered questions from some of her lucky fans who attended. The event was also live streamed from LA. During the interview Adele said about the ‘I Drink Wine’ promo “My favorite music video I’ve ever done”. Adele spoke about wanting to work with the extremely talented and “cool” Director Joe Talbot who directed the brilliant ‘The Last Black Man In San Francisco’, so they met up together at her house in Palm Springs, discussed their ideas, and Joe went away and produced the treatment along with poet and writer Olivia Gatwood (who also appears as Adele’s mother in the video) and his brother Nat Talbot. Thankfully Adele loved it and the rest is history as they say!

Aquabatix’s own Adele (Carlsen) and Aquabatix USA choreographer Valerie Williams consulted with the music video’s Director Joe Talbot and producer Whitney Jackson pre production to achieve the vision with the choreography. Valerie, who is based in LA, then created the aquatic sequences for the Aquabatix synchronized swimmers with a couple of rehearsal days prior to the two day shoot that Joe attended as well.

Valerie goes on to say “Joe gave us the notes during the rehearsal for the main chorus choreography and we workshopped the lover scenes with him. Joe had a clear vision and updated the animatic after he saw our choreography. We reviewed the shots for each lyric in detail and were called in for a second rehearsal on set with a stand in actress for the artist”.

In describing the synchronized swimming choreography, Valerie mentions ‘the choreography was based around the artist’s placement within the centre of the circle. With 12 synchronized swimmers, we created two circles. I chose to feature modern, contemporary synchronized swimming choreography instead of traditional water ballet (to bring more of an edge to it) and I believe we co-created an incredible piece including Joe’s ideas. Movements were designed to be minimal splash but to still capture the essence of the powerful melody. A unique challenge was that the swimmers had to perform this all to counts and not the track, as the music was not played back on set’. 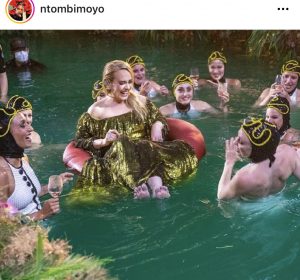 Valerie worked with acclaimed dance choreographer Eboni Nichols for the scenes with the lover, played by the brilliant Kendrick Sampson. Valerie also mentions that the “level of preparation and organization was stellar across all departments and the final product I think will be incredibly beautiful and moving”. 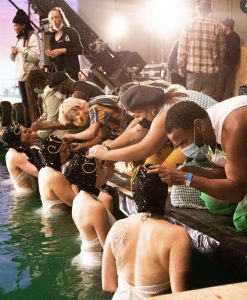 Aquabatix also worked closely with Joe and the wardrobe department led by Ntombi and with the fabulous fashion designer Kevin Arnett came up with the design and make of the glamorous suits and caps, accessorized with long black gloves. Wearing white swimsuits with black paneling, accessorized with black gloves, diamond bracelets and black swim caps with gold, the synchronized swimmers fit perfectly around the glamorous Adele in her Valentine gold dress, the same one she wore to perform ‘I Drink Wine’ at the Brits earlier in the year. 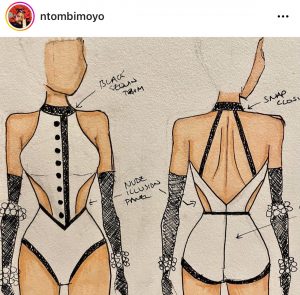 To read on, the next piece contains spoilers!  The ‘I Drink Wine’ music video was filmed in the parking lot of Paramount Studios in Los Angeles. It starts with a man playing the piano on a bridge, over a river with a sunset behind him, when Adele comes into shot on a large inflatable ring, holding a glass of wine and starts singing.  Adele passes by a couple and then a mother and young child reflecting her own childhood. The first sign of the synchronized swimmers is when an arm appears out off the water with a bottle of wine to pour for Adele, which Adele described as her favorite moment in the video. The video goes on to show Adele surrounded by the Aquabatix synchronized swimming troupe whilst she is singing. Eventually the swimmers move on to remove a man, played by the brilliant actor Kendrick Simpson, who is flirting with Adele, with Aquabatix described as “her synchronized swimming friends push him away”.  and they then start to try and force more wine onto her which she starts to reject. The water and Adele’ floating through it on an inflatable like a lazy river, possibly symbolizing the flow between past, present and future with the song written about divorce and letting go go ego. 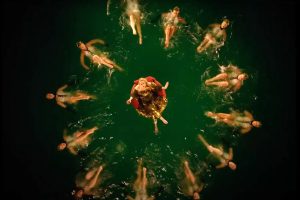 The seven minute video has won high praise amongst fans and media alike.

Rehearsals took place in LA at the Palisades High swimming pool as well as on the Paramount filming lot where the video was shot. A specially constructed water stage outside on the parking lot was used during the 2 night shoot and can be seen towards the end of the video. 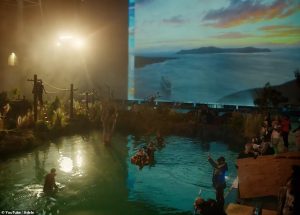 Director Joe Talbot said of the Aquabatix synchronized swimmers in the I Drink Wine video; “ (the) team was wonderful to work with, such fun and generous energy, and I really believe that bleeds into what we have captured on screen.” Joe also went on to say “Working with the team was one of the distinct highlights of the whole experience. I just did a write-up for Letterboxd…and talked about how warm and optimistic and can-do you all were, even when the sun was about to rise”.

Adele stated, when releasing images on her social media accounts, “Thank you Joe Talbot for creating a world for it and for putting the most incredible bunch of creatives together, you’re so talented and I’m honored to have worked with you all”.

Director of Aquabatix Adele Carlsen said “We worked closely with Joe and production throughout the whole process from consulting on synchronized swimming in real lakes at the pitch stage, through to ideas of choreography within a shallow filming tank and working with the Director’s vision as well as what we thought could enhance that as well, right through to the final shoot days with Aquabatix USA choreographer Val on set working alongside the incredible Eboni Nichols. The whole team were brilliant in every way to work with. A clear vision, engaging and incredibly friendly to work with in their approach as well as being super organized. Joe is such a talented Director and it was fantastic to have the opportunity to work with him. When we found out who the artist was, we felt truly honored to have been entrusted to do what we do best to help create this with Adele and her team. Aquabatix understands all about the very high standard of expectation of performance and choreography required for projects like this, because we hold ourselves to that same high level in everything we do. We draw on our Olympic level experience of a hard work ethic in high pressure environments to deliver our best work within an entertainment environment alongside superbly creative individuals.” Adele goes on to say “Valerie is a superb synchronized swimming and aquatic movement choreographer and we knew Val would create something spectacular with the Aquabatix LA synchronized swimmers. This is also her moment to shine” 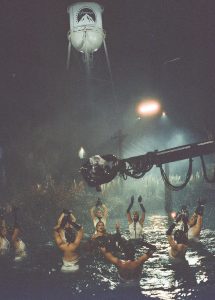 Adele then goes on to say “Adele was always the top of the Aquabatix wishlist to work with, so this is a dream come true. Aquabatix, like Adele, was also born in London and since then we have developed and grown Aquabatix USA to have their home in LA. As my name twin too, it feels like the perfect connection. We wish Adele every success with this beautiful song and music video I Drink Wine and for her upcoming gigs in Vegas. I really hope one day we get to work with not only Adele again but and also Joe and the production team who were just a delight to work with.” 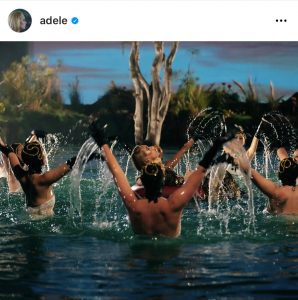 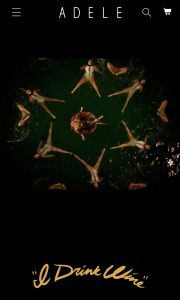 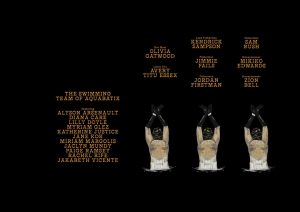 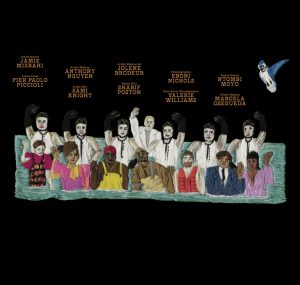 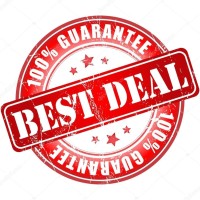 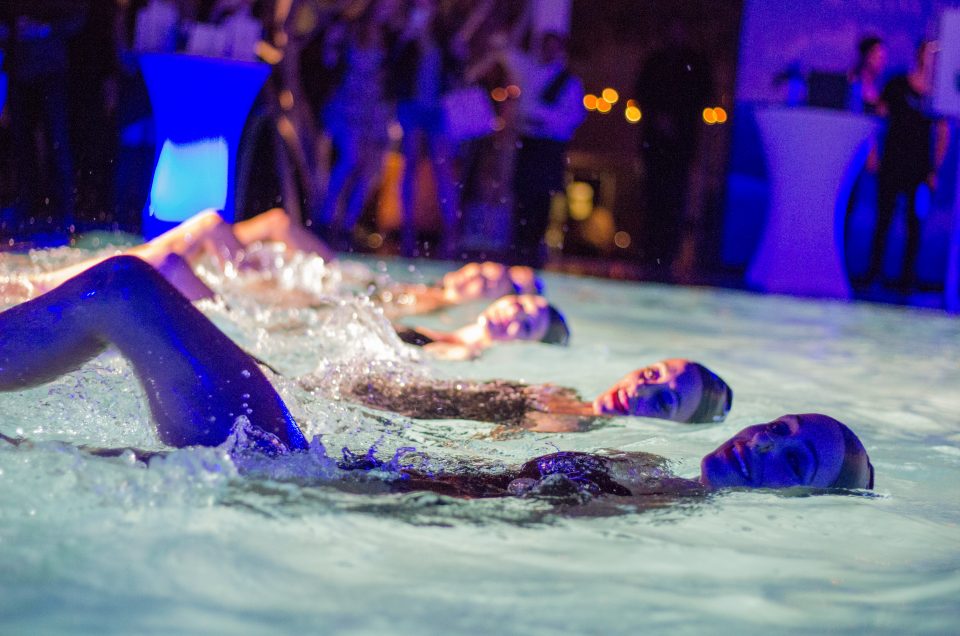 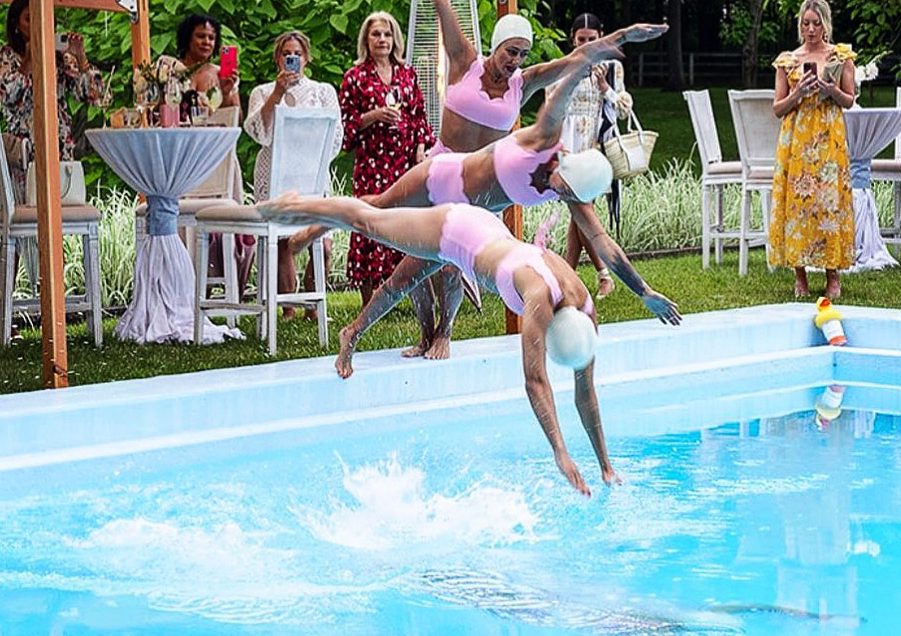